Let's get you Enrolled!

Let's get you Enrolled!

Ready to enroll for the summer and fall semesters? We got you covered! Here is everything you need to know about enrollment. 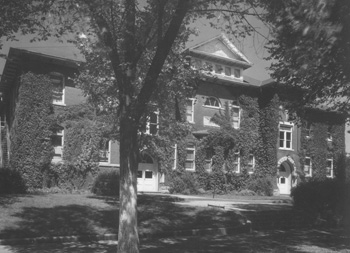 Coffeyville Community College had its beginning in 1921 when enabling legislation in the Kansas Legislature created the school. Then on February 12,1923, the Board of Education voted a resolution to present a proposal to the voters to establish a junior college in Coffeyville. On April 3, the proposal passed in every precinct with a vote of 2,322 to 656. September 1923 twenty-five students with six instructors enrolled tuition free at the new Coffeyville Junior College, the seventh in Kansas, in three rooms of the Washington High School at 10th and Willow. The library had 3,500 volumes and the curriculum included 26 courses in seven departments. May 24, 1925, thirteen girls and one boy comprised the first graduation class.

Coffeyville gained national recognition in 1938 and 1939 by winning its first national championship in debate. Karl Wilson, who for more than forty years had contributed to the success of the College, was debate coach. He became Dean of the College in 1942 and served until 1967.

The present classroom building opened in 1958 with more than 500 students. In 1965, Coffeyville and Caney voters voted to join the Kansas system of junior colleges as a southern Montgomery County District and then became Coffeyville Community Junior College with an enrollment of 764 students. V.A. Klotz was the first president of C.C.J.C.

Dr. Dan Kinney became the third president of the College in 1985. Under his direction, the dorms were increased in size to house 305 students, Nellis Hall gymnasium was built, and the Student Union was increased in size. Enrollment was also increased to almost 2000 students.

Dr. Jim Stringer was an interim president after Dr. Kinney left in August of 1994 until the new president was hired in February of 1995.

Dr. Ronald Thomas became the fourth president of the College in February 1995. He helped dedicate the new addition of Nellis Hall and the upgrading of the new football complex.

Dr. Jim Stringer again was interim president from August 1999 until June of 2000. Dr. Howard “Sam” Bass became the fifth president of the College in June of 2000. March of 2001, Dr. Bass announced the joining of Coffeyville Community College and the Southeast Kansas Area Technical School. The new name of the College is now Coffeyville Community College / Area Technical School.

Dr. Jim Stringer again was interim president for January 2004 until June of 2004. Dr. Don A. Woodburn became the sixth president of the College in August of 2004.  He helped in obtaining a ten-year accreditation by the Higher Learning Commission and was instrumental in the development of a new women’s residence hall in 2006.